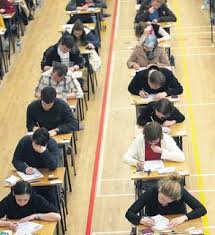 Any room filled with nervous students taking an important examination is bound to be quiet.

The only sound you might hear are pencils scratching across paper as they put down all the knowledge they possess, in the hope of winning a coveted spot at their dream university.

What, then, is the supervisor to do? Once you've scanned the rows of desks and determined that no one is cheating, what's to be done to kill a couple of hours?

One such supervisor thought he might post updates to Twitter. It's a mindless enough activity, nothing that might distract him from someone fainting with horror upon discovering that they have to write an essay on James Joyce and the resurgent Gaelic Movement, an era the student has completely forgotten.

Tweeting is forbidden. So is reading the newspaper or a book, knitting a new pair of mittens, or composing a novel. Leaving Certificate examination supervisors are to supervise and nothing else.

The guilty exam proctor was promptly given the sack for tweeting while supervising. The officials who are in charge of the Leaving Cert assured everyone that the exam itself was safe and no one has to re-take the thing next week.

Rather a harsh sentence for the unlawful use of a Twitter account, but when you're hired to do a job, you're expected to do it, even if it means sitting in the front of a classroom twiddling your thumbs.

Unless, of course, twiddling is also grounds for dismissal.
Posted by O hAnnrachainn at 1:01 PM