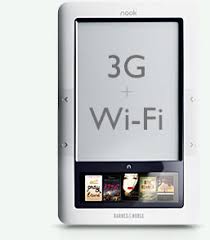 The iPad has taken off, sales are skyrocketing, and the thing costs close to $500.

Not cheap by any means. Even so, there are those technophiles who simply have to have the newest toy.

The Kindle isn't new any more, and it has competition beyond the iPad. After all, an iPad does much more than Amazon's electronic reading device. Trying to out-do Apple isn't where the Kindle is going. It can't hang around a price point that's close to the iPad because it's so weak in comparison.

Competitive pressure is coming from Sony, which invented the Nook as an alternative to Amazon's Kindle, and the price war is concentrated at the e-reader level.

Sony released the Nook and charged $259 for it, forcing Amazon to drop their price to keep pace. Sony has again lowered the price on their e-reader because people are looking at iPads and thinking the Nook isn't worth the money because all it does is books.

This week, Amazon dropped the price of the Kindle further, putting some distance between an expensive iPad that does everything and a book reading device that only delivers the written word. They can't be the most expensive e-reader out there, either, so they're looking over their corporate shoulder at Sony, which is set to introduce a Wi-Fi enabled e-reader soon, at an even cheaper price.

Will the price war cull the weak and strengthen the e-reader industry?

Few people bought downloaded books last year, and it has yet to make large gains in popularity. There's just something about books, about their physical presence on a shelf, that is totally lacking in a piece of plastic filled with circuit boards.

If you want to read on a tablet, why would you spend a couple of hundred dollars on a Kindle when you could get an iPad for twice the price, but with more than twice the features?

It's hard to envision a future where the Kindle or the Nook are around. Offering them to the public at a lower cost won't make the iPad less desirable. Sometimes it's not entirely about how much an item costs, but about how much the buyer gets for their money.
Posted by O hAnnrachainn at 1:04 PM