Duct Tape: The Eighth Wonder Of The World

Is there anything you can't do with duct tape?

The Mythbusters crew has demonstrated just some of the many uses of this wonder on a roll.

They've built bridges, car lifts and boats out of the stuff, and anyone who's done anything around the house knows that a well-placed piece of duct tape can handle almost any repair job.

But did you know that it's useful for repairing your ambulance?

Irish paramedic Simon Sexton of the Cavan Regional Hospital lost his life when an ambulance door popped open unexpectedly and he fell to the road while trying to close it. A problem with the door latches on all the HSE ambulances in the region was discovered, and authorities moved quickly to correct it before another paramedic was killed or injured.

To retro-fit the latch system would not only take a great deal of money, which is scarce as snow in summer these days, but would require down-time for the ambulance fleet. The northeast of Ireland could not be left without ambulance coverage. The citizens could not be expected to rely on private ambulance service. 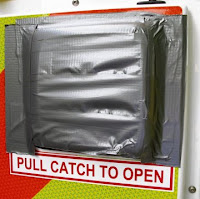 The answer is duct tape.

Emergency latches are being covered in duct tape.

To open the door, the duct tape has to be removed. Only then can an operator turn the handle to open the emergency door.

Considering how strong and highly adhesive duct tape is, a person would have to slice it off. Also, there's no chance that the tape could be stretched enough to allow someone to get a grip on the handle once the tape was pulled across. Fast as simple. A little duct tape and the troublesome handle is not such a safety hazard any longer.

Even if someone were to fall against the handle, the forces that the tape can endure would hold the covering in place. The chances that the emergency door could open while the vehicle was moving are fairly remote thanks to duct tape.

At some point, the ambulance manufacturer may come up with a better latch that doesn't fly open readily. Until then, there's duct tape. It's cheap. It works. And carpenters have been known to use it to repair some sizable cuts. Has anyone at HSE noticed that it's far cheaper than traditional butterfly bandages?
Posted by O hAnnrachainn at 4:01 PM