The New Me: A Book Review

Well, it's short. More of a novelette, or a very long short story. So there's that to be thankful for.

THE NEW ME is touted as darkly hilarious and devastating. Not particularly funny, although Halle Butler's voice carries a hint of humour. As if you're spending time with a friend possessed of a dry wit and a masterful eye-roll.

Trapped in the funhouse of American consumer culture? Didn't get that bit at all, at all. Who writes the cover copy? Did they even read the book?

As best as I cal determine, thirty-year-old Millie is one of the many millenials who went to university and obtained a worthless degree that leaves them as unmarketable as the average secondary school graduate. She works for a temp agency and feels as if she is entitled to live in an expensive city like Chicago even though she doesn't earn enough money to pay her own rent. The parents help her along, perhaps to keep her from moving back home and bringing her whingeing with her.

Most of the book is more of a "woe is me" sort of thing, the weight of the world on her shoulders and an absence of understanding in her skull. Millie is the girl you don't want to talk to at a party.

Yet I do know people like Millie, the head-in-the-clouds dreamers who think that dreaming is enough to achieve the goal, like landing a lucrative job and sailing away on a solid career path. it's all the hard work and sacrifice that spoils the fun of living in the big city with a very high cost of living. There's a reason why we are advised to not envy our neighbors' goods. Just leads to depression, which Millie has in abundance.

I finished the book. It was only the author's voice that kept things interesting.
Posted by O hAnnrachainn at 5:39 PM No comments:

The Altruists: A Book Review 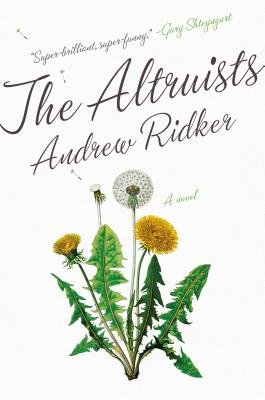 The literary world is filled with them, the Jewish girls who live in New York and hate their mothers, the gay man, the scion of academe, and all so self-absorbed as to make them laughable. They are here, in THE ALTRUISTS, but author Andrew Ridker does not present them as serious folk worthy of sympathy.

The family at the center of the novel is a dysfunctional crew, with no redeeming characteristics. We don’t have to cheer for them, feel for them, or hope for them. Just laugh at them, as the rest of the non-literary world laughs at the shallow creatures.

Four people, so wrapped up in themselves that they don’t notice the others. What made this novel so readable was the fact that I did not feel as if I had to follow the formula, that the author invites his readers to snicker at the antics of his clueless creations. Does he write from experience at the prestigious Iowa Writers Workshop?

I kept turning the pages, wondering if any one of the four would reach that moment of awareness and evolve into a decent human being, as is standard format for the typical novel. Not to give the ending away, but it did follow the prescribed formula as taught, no doubt, at the Iowa Writers Workshop.

Worth a weekend when you need a giggle and can get past the endless litany of Jewish New Yorkers with links to academia that are so popular with the publishers these days.
Posted by O hAnnrachainn at 12:51 PM No comments: