Brushing Up On Protocol

It's been an age since Ireland had a visit from British royalty.

King George arrived one hundred years ago, shortly before the Dublin workers were locked out and Jim Larkin was organizing the union. To say that George arrived in a peaceful nation happy to see him would be very wrong.

Before him, there was another visit that went poorly. Queen Victoria was young at the time, stepping out on Dublin's streets as a rather sheltered girl who had no idea her subjects were literally starving to death all around her.

The fact that she was feted with an overabundance of food did nothing to endear her to the Irish.

There's no great love of British royalty in Ireland, not among a people possessed of long memories and capable of holding grudges across generational lines. The young ones might be intrigued by the princes, their lives the stuff of gossip rags, but a full-out royal visit? Don't expect Gerry Adams or Martin McGuinness to be high on the guest list.

Taoiseach Brian Cowen has extended an invitation to Queen Elizabeth to pay a call. The relationship between the two countries is better than ever, with the peace process taking hold in the north and both nations struggling mightily with an economic meltdown.

In the Dail, Caoimhghin O Caolain of Sinn Fein is pitching a fit, and it's unlikely he'll quietly stay at home while the Commander in Chief of the British armed forces is marching around the Phoenix Park. And he won't greet the Queen with open arms until England moves on its promise to investigate collusion between the English army and the loyalists in regard to the deadly bombings in Dublin and Monaghan back in the '70's.

A pleasant state visit with happy faces all around? Not likely. 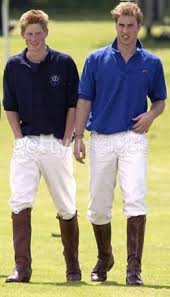 The Queen might consider leaving the old man at home and bringing along Harry and Wills. The Shinners' protests would be drowned out by the squeals of the young ladies and everyone could pretend that things went smoothly during the first royal visit since independence was won.
Posted by O hAnnrachainn at 1:13 PM