The drinks party ended far too early for some of us, so off we went to the nearest pub.

Let's do "car bombs" says the Big Swede and I'm up for anything that involves Guinness. It's the name, however. 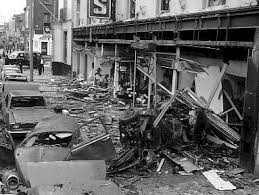 It hasn't been all that long since Dublin and Monaghan were attacked by the Ulster Volunteers. No one was ever charged with the mass murder of innocent Irish shoppers, and it's still said that the British Army was heavily involved.

The young lady behind the bar lined up four half-pints of the Black Stuff and then set up a row of shot glasses. She wasn't even born when Dublin's Talbot Street went up in smoke and flame and shrapnel. All she'd know of car bombings in Ireland might have come from the film Omagh.

A shot of Jameson's fine Irish whiskey was topped with a generous splash of Bailey's Irish Cream.

We dropped the shots into the beer and chugged it down before the cream in the Bailey's had a chance to curdle.

It was delicious. The perfect drink to close out an evening when you have a taste for something sweet but don't care for a dessert.

We've come a long way in the peace process. The Troubles are so far behind that they've almost disappeared in the rear view mirror of the car. The name of a drink means nothing more than the action of dropping a shot into a glass of beer, mixing a variety of Irish beverages. It's a creation of the younger generation that did not live in fear of random acts of terror.

To them, a car is a lethal weapon when the driver's been drinking. And that's as it should be.
Posted by O hAnnrachainn at 1:13 PM