The nuns don't have all that much money these days and they tend to invest wisely and conservatively. With so many elderly sisters to support, they've got their eyes on the bottom line of their portfolio. 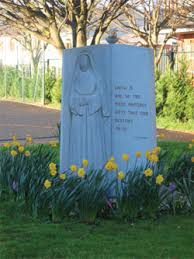 So when Morgan Stanley pulled off a clever bit of business with some Dresdner Funding Trust bonds, the Holy Faith Sisters in Glasnevin promptly sued.

In the eyes of the religious, Morgan Stanley was under contract to redeem notes when the bonds were downgraded to junk status. The prayerful order had no intention of taking too much risk with their limited funds.

We're right on top of it said Morgan Stanley, but the investment bank waited for six months to complete the transaction. By that time, the value of the bonds had climbed and Morgan Stanley was $11.2 million to the good. They had to earn something for their time and management, didn't they? Just a little "termination payment", Mother Superior, and sorry there's nothing left for the sisters but that's business.

The bonds were purchased through Bloxham Stockbrokers, a London firm that is being sued by other investors who also fell for Morgan Stanley's snake oil. In fact, Bloxham is joining in the suit against Morgan Stanley, claiming that they were bamboozled.

Morgan Stanley will have some explaining to do within the next two weeks. It's one thing to pull a fast one on some well-heeled investors who can afford to take a risk. It's quite another to take advantage of a religious order that's dedicated to helping the downtrodden.

Then there's all the entreaties to God, asking for Divine Retribution. I wouldn't want to be a Morgan Stanley executive right now, with the Holy Faith Sisters praying for justice. Maybe the nuns could pray for a Catholic boycott of Morgan Stanley while they're at it.
Posted by O hAnnrachainn at 12:59 PM