Meet And Greet At Irish Fest 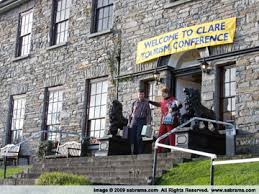 When you think Irish, you may not think Milwaukee, Wisconsin. There's more to Irish culture than Chicago's politicians, you know.

Irish Fest is said to be the biggest celebration of all things Hibernian. It follows, then, that the tourism promoters from County Clare would head up to the town due north of Chicago and encourage visits to the west coast of Ireland.

Unfortunately, money is tight in Ireland these days and the Clare Tourism delegation is being criticized for traveling abroad when everyone else is tightening their belts.

The Mayor of Clare, Christy Curtin, will be staying at home. Rather than a big group, only three people will be on hand to sell, sell, sell.

Those who complain of the cost are short-sighted. It takes money to make money, and it takes promotion to convince Americans who might be thinking of taking a trip abroad to come to the other side of the island, where it's peaceful and quiet and the golf is great.

Hitting Milwaukee means attracting a good chunk of the Irish interest in Chicago, which is so close that it's not unheard of for people from the northern suburbs to use Milwaukee's airport rather than drive to O'Hare. Staying in Milwaukee is cheaper, but the Clare Tourism Forum is reaching the bigger audience in Chicago at the same time.

Tourism is down because of the economy, and the Clare Tourism Forum has to work that much harder to snag their share of the limited business. If they stayed away from Milwaukee, they would save the cost of their trip, but how much would the nation lose in the long run?
Posted by Peg Leg O'Sullivan at 1:03 PM

I have to say, County Clare is putting itself in a very GOOD position by attending Milwaukee Irish Fest this year.

While other groups are abandoning this traveling audience, Clare is knocking right on their door.

The tourism area of the festival has lost most of its regional booths (Clare and Northern Ireland might be the only ones there this year). That means Clare can capitalize on the lack of competition.

This also changes the behaviors of festival goers from brochure collectors to people who stop and talk to reps. Which might actually pose a problem with the limited number of representatives vs festival goers.

Regardless, Clare will have almost exclusive face time with people who will likely be booking trips within the next 12 months.

I also feel regional representatives, like the group from Clare, do a better job of answering questions about topics that influence tourist buying... like costs, offerings and safety/comfort.

In my observations, Tourism Ireland is great at getting people excited about Ireland and promoting tours and sales, but regional tourism is better at getting people to make a decision... they're closer to the product.

County Clare Tourism received a potentially big boost in July with one of its most famous landmarks, The Cliffs of Moher, being featured on the wrapper of the world famous Cadbury Dairy Milk. The design for the wrapper, featuring the cliffs, was the winner of a national competition and was voted for by over 28000 people in Ireland, giving great exposure to Clare and the Cliffs of Moher.
The bar was launched at the Cliffs of Moher and was featured in a national media campaign. To find out mor about this you can read here http://midpointcreative.com/?p=297