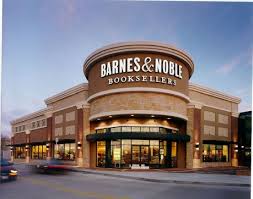 As expected and anticipated, big box book store and on-line retailer Barnes & Noble is on the market.

The Board of Directors thinks the stock is undervalued. They think there's money to be made in books of all varieties, both real and digital, and their stock options should reflect that belief. How to realize this desired gain in value? Sell.

Book sales are down because no one has money for luxuries, and books are a luxury. If you don't have access to a public library, it's easy enough to shop at Abebooks and find a used version at a steep discount. That translates into one full-priced sale for the likes of Barnes & Noble, while several people read a single copy.

Leonard Riggio, the majority shareholder, has suggested that he'd be part of a group to buy up the book dealer. There's a man with faith in the future of the published word.

Ever since Amazon came aboard, it's been a tough competition. Add to that the popularity of the iPad, with e-book sales revenue going to Apple, and you'd have to expect the market for literary warehouses to be shrinking.

Will Barnes & Noble survive? They seem to be winning out over rival Borders, which has just laid off another one hundred employees at its Tennessee distribution center.

In the battle for e-reader supremacy, it's hard to say if the Nook will beat out the Kindle. It's unlikely that anyone would buy two or more electronic reading devices and Amazon was there first. iPads are so far advanced from a simple reading device that Nook seems almost primitive, and one would hope that Mr. Riggio isn't putting too much faith in B&N's future as an e-book retailer.

Unless there's a B&N app for Apple devices?
Posted by O hAnnrachainn at 1:05 PM