U2 Are Getting Old 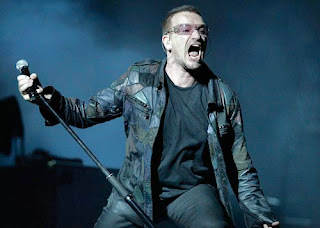 It's always the back that goes, isn't it? You can take the creak in the knee, the pop of the ankle, but God help you when you throw out your back.

Bono's not so young as he once was.

Not so spry. The tendons have lost their youthful elasticity.

Like so many men getting on in years, he's had to undergo back surgery to repair some damage done under circumstances not yet explained.

U2 has been touring for some time now, and were getting ready to make the return trip across America for a round of summer concerts that would close out the 360 tour.

Whether or not that will happen remains to be seen.

Bono's recuperating from back surgery in Germany, and the remainder of the tour is postponed indefinitely. Any kind of operation around the spine requires a long spell of recover, followed by therapy. So many nerves coursing through there, and any sort of inflammation adds to the problems. It's not an area of the body to treated with disdain.

What does the future hold? Will Bono be less active on stage in future? Will he rock but not roll, sensitive to the slightest twinge in the lumbar region?

It sucks to get old, doesn't it.
Posted by O hAnnrachainn at 3:02 AM