The Ulster Museum isn't British enough to suit the Orange Order, or the Minister for Culture for that matter.

Where's the prominence given to the Ulster Scots? It's their country, isn't it? Forget about the Irish Catholics. They lost the war, didn't they? So why not arrange things in the museum to suit the Free Presbyterian view of the universe?

Currently on exhibit, Plantation To Power Sharing doesn't do enough to put the Orange Order and all the other anti-Irish, anti-Catholic organizations in a pleasant light. Far too much about the United Irishmen, that long ago group that wanted to free Ireland from England's stranglehold. Bad enought that so many of them were Protestants, but is it really necessary to present history as it was and not as Mr. McCausland would like it to be? 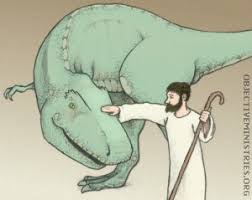 While the Museum is at it, it's high time that they provided some alternative views on the creation of that universe. Nelson McCausland won't call it a promotion of creationism, but he'd like to see creationism presented as science.

Mr. McCausland did not find it the least bit funny that British scientist Richard Dawkins suggested that the museum also include the "stork theory of reproduction", and furthermore, that's an insult to fully one third of the Northern Irish population.

That would be the one third who think The Flintstones was a documentary.

The Ulster Museum is being quite diplomatic about the dust-up, and as the government is providing their funding, the museum's scientists won't laugh out loud at Mr. McCausland and his ilk. Perhaps they could build a diorama dedicated to those who like their world preserved in amber, but not like those prehistoric bugs encased in amber because they're not the least bit old and that carbon dating business is all a nonsense and we aren't sharing a bit of power with the Shinners and the damned Catholics.....

A display of Orange Order loyalists might do. Riding on the backs of dinosaurs, on their way to extinction.
Posted by O hAnnrachainn at 1:49 AM