No one else could see the Blessed Mother, but Joe Coleman assures us all that he witnessed an apparition at Knock yesterday and he was given a message. 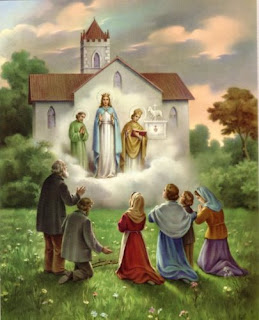 It's a secret message from Herself, but he did wish to impart one key portion.

The Mother of God is upset about Joe's treatment there at Knock. She's got her knickers in a knot because Joe and his followers aren't being allowed to pray as he'd like in the shrine.

Anything else Our Lady would like us all to do for her faithful servant? Perhaps he could claim that She's furious over the fact that Joe isn't receiving a hefty government stipend to continue his praying work. Why, he could kneel in the grass outdoors and stare at the sun all day if the Dail would see fit to grant him a salary.

Not too self-serving, is it? To cry to the press about the clergy who run the shrine at Knock is one thing, but to proclaim that Mary is less than pleased is bordering on farce.

So take that, figures of authority. The Virgin Mary says you should do what Joe says. Because Joe said so.

Little wonder that the crowds who have shown up when Joe announces an impending vision has dwindled, and yesterday reached 200 trusting souls, praying with all their might.

You can bet that the clergy in charge of the shrine are praying that Mr. Coleman's fifteen minutes of fame are coming to an end. So hard to shepherd a flock in the midst of such distractions.
Posted by O hAnnrachainn at 1:12 PM