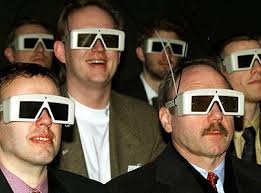 By the thousands they donned their 3-D glasses and watched cartoons.

Avatar this, Mr. Big Time Producer Cameron. Hugh Hefner's got your 3-D right here, and it ain't no cartoon.

In his wisdom, Mr. Hefner has decreed that the first thing any man wants to see in 3-D isn't some blue-hued imaginary creature but a genuine naked lady. Desperate to sell magazines, he's taking that "Give the customer what he wants" notion into full nudity.

Some years back, Sport Illustrated did the 3-D glasses thing for the swimsuit edition. It was so successful, apparently, that it was never repeated again. The editors of Playboy must think that the lack of interest had something to do with the models being partially clothed, since they're planning on inserting a set of 3-D specs in the June issue and figure on record sales.

The problem is, once you've lost the glasses or they've fallen apart, you the magazine buyer are left with a blurry picture. And what of the soldiers who post the centerfold so prominently in their barracks? Are they to be expected to sit around daydreaming with 3-D glasses perched on their noses at all times? Hard to catch a casual glance of Miss June in focus without them.

On the other hand, if there's enough hype, maybe a few more men will choose Playboy over Maxim or whatever other girlie magazine is outselling the old dinosaur. Get a copy into the hands of the desired demographic, even if it takes a silly gimmick, and maybe those same young men will buy the next month's issue.

Marketing strategies can make or break a publication, but sometimes the cutting edge gets dull with time. Being the first out of the blocks doesn't mean you'll win the race, even if you're the one who laid out the course and smoothed out the rough spots for those who came after.
Posted by Peg Leg O'Sullivan at 1:05 PM