A Public Case Of Sibling Rivalry 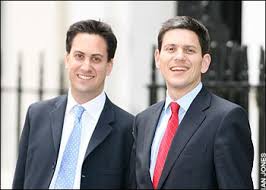 A band of brothers.

You'd think that two men related by birth would be closely aligned, given the perception of the bond between brothers.

Unless those brothers are in British politics.

David and Ed Miliband both wanted to be the leaders of the Labour Party, but there's only chief and more people liked Ed. Who'd want to be sitting around the family dinner table at Christmas after that bit of business? What's a poor mother to do, having to congratulate one son while commiserating with the other. Not a pleasant evening to be had.

Not satisfied with beating out his brother, Ed had to go and knife him in the back while giving his very first speech as Labour leader.

Labour was wrong to take Britain to war in 2003, little Eddie announced to much applause from the Labourites in Manchester.

And there was his brother in the audience, the former Foreign Secretary who pushed for Britain's entry into Iraq. Not clapping. Not smiling.

Rumors about David's departure from politics are swirling. He can't comfortably sit in the shadow cabinet behind his brother and save face, not after a public drubbing.


Colleagues in politics want him to stay on and stand for election, but others fear his presence would only encourage the journalists to report on every perceived flinch as another example of destructive sibling rivalry within Labour, and that at a time when Labour is struggling to return to power.


All eyes are on the Miliband brothers as the tabloid types hunt for cracks on the family foundation. One brother destroying another's career, making him irrelevant in politics when politics has been his life. That's the sort of sibling rivalry we're expecting to see in North Korea once Daddy passes away. Not very sporting of you, old man.
Posted by O hAnnrachainn at 1:15 PM