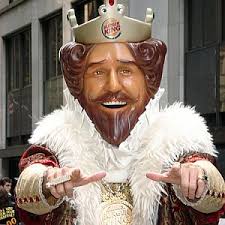 The all-you-can-eat meat buffets have vaguely Portuguese names, to put the diner in Brazil where such dining is said to be popular.

Like anything else, there's a limit to how many Brazilian restaurants any one town can support. The South American meat producers need more markets for their product.

How about the Home of the Whopper?

Burger King has been taken over by 3G Capital, a New-York based firm with Brazilian money behind it. Four billion dollars worth of money, according to reports.

Not a bad investment for the group that bought Burger King from Diageo back in 2006. An initial investment of $1.5 billion sure did provide a nice rate of return.

Jorge Paulo Lemann, Carlos Sicupira and Marcel Telles have big plans to take the King global. They must believe that they have something to offer that could knock McDonald's off of its international perch, and what could that be besides Brazilian beef?

A steady supply of ground animal parts at a low price could spell discount burgers for everyone around the world. Except for India, that is. The Hindus wouldn't touch a burger no matter where the bovine flesh came from.

Imagine O Rei in Ecuador or Chile, Russia or China. So much more intimidating a mascot than the wimpy Ronald McDonald. Burger King can't miss.
Posted by Peg Leg O'Sullivan at 12:45 PM