The Architect Vs. The Engineer 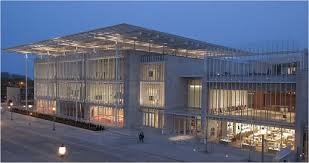 They are a creative bunch, the architects. They draw pictures for a living, after all, and go around imagining buildings that aren't there.

What they don't know how to do is construct what they've dreamed up.

Sometimes, the architectural engineers whose job it is to translate dreams into reality don't quite know how to construct imaginary objects either.

The Art Institute of Chicago is suing the engineering firm that took Renzo Piano's vision and turned it into an actual structure containing priceless works of modern art.

The museum claims that Ove Arup & Partners made a mess of things, to the tune of $10 million worth of needed repairs. There are concrete floors cracking, windows fogging up, and an overwhelmed air conditioning system.

You might wonder why the Art Institute didn't go with Skidmore, Owings & Merrill, a Chicago firm, to handle the engineering. They'd be more likely than a London firm to know that the Art Institute is built on landfill on what was once a swamp, and if you like humidity, you'll love Chicago in August.

The lawsuit is going forward because the Art Institute claims that Ove Arup & Partners failed to offer any financial concessions when presented with a bill of particulars. Someone has to pay for the errors in engineering, after all, and it won't be Mr. Piano or the well-heeled benefactors.

Unfortunately, engineers are the ones left holding the bag when an architect's vision isn't readily translated into brick and mortar and steel beams. The firm makes its best estimate of costs, lands the contract, and then prays that someone on staff can figure out how to make a flying carpet roof that doesn't whistle due to air turbulence.

Lawyers will go into court to argue over who is at fault, and try to convince a judge that the engineers were tasked with the impossible and it's the architect's vision that's flawed, while the other side claims that promises were made and no one said it couldn't be done.

Money will change hands. The repairs will be made. The engineering firms who bid and lost will sit back and gloat, savoring an 'I told you so' moment.

Musuem guests won't know the difference. Whether the floor is cracked or not, the Modern Wing is a beautiful space filled with beautiful (and a few ridiculous) objects. On the surface, Renzo Piano's vision and Ove Arup & Partner's execution has accomplished what was desired---an impressive building.

Albeit one that gets a bit steamy during a hot Chicago summer.
Posted by O hAnnrachainn at 1:17 PM