It's Not The Titanic 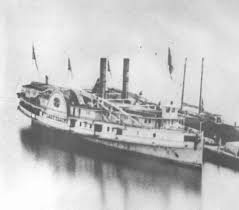 The subject of film and fiction, a doomed icon, there's been no end of interest in the Titanic. No one much cares about the Lady Elgin.

It's been one hundred fifty years since the Lake Michigan steamer went down just north of Chicago, taking the lives of three-hundred-fifty people. Yet the shipwreck is all but forgotten, part of the lore of fly-over country.

The wreck is owned by Harry Zych, who clearly did not dive in search of treasure. Those who sailed on the little ship were traveling inland waters, not wealthy robber barons hauling their jewels and treasures about. Mr. Zych brought up about three hundred dollars worth of coins, the pocket change of those who drowned.

What he'd like to see is some recognition of the worst shipwreck in Lake Michigan history. He has artifacts in storage which would make a fabulous display in a museum, but no museum is much interested in paying for the cost of preservation.

Offer them a plate from the Titanic and they're all over it. Offer them plates from the Lady Elgin and they don't have the money to mount an exhibit.

The Irish Union Guard of Milwaukee was on the ship, returning from a fund-raising trip to Chicago. They'd gotten on the wrong side of Wisconsin's abolitionists and had their weapons confiscated. Seems they weren't in favor of slavery, but they wouldn't support Wisconsin's secession if the U.S. didn't abolish slavery outright.

In spite of the captain's concern with the weather, the ship set off for Milwaukee. It wasn't the weather that did her in, but a collision with a lumber ship that was sailing under a full press of sail, out of control. The Captain of the Irish Guard lost his life, but only after he'd rescued several victims.

Northwestern University student Edward Spencer swam out into the pounding waves to save as many as he could, ending up permanently injured. Could there be a more romantic figure than him? Yet no one would know of him if not for the lifesaving station that was constructed in Evanston, to be manned by students of the nearby university.

No millionaires or robber barons, but Irishmen willing to fight to preserve the Union and ordinary families traveling between Chicago and Milwaukee. A brave young man, risking his life to save others. The saga of the Lady Elgin is a story more worth telling than that of an ocean liner hitting an iceberg, but it's largely forgotten.

Memory fades, and history is often lost. The tragedy of the Lady Elgin is not so much the sinking as the fact that museums in Chicago and Milwaukee don't seem to notice that their local lore has as much merit as a British steam ship that sank in the Atlantic Ocean, thousands of miles away.
Posted by O hAnnrachainn at 1:18 PM