Tripped Up In The Details 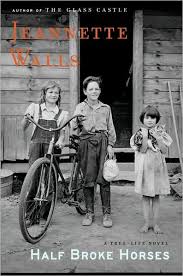 The book club is reading Jeannette Wells' Half Broke Horses this month.

Better than some of the selections that have been explored this year. The novel is almost a biography of the author's grandmother, a woman who lived a hardscrabble life but found ways to survive and thrive.

The reading was going along smoothly until Ms. Wells' grandmother decided to move from her birthplace in Arizona to Chicago.

Some things set my teeth on edge. Things that spoil an otherwise good book.

I know it's fiction, but if an author is using a real place in a real time, shouldn't they at least do a quick Google search to ascertain the facts?

The main character in the novel goes to Wrigley Field as a young woman before the First World War.

Nice touch, but Ms. Wells didn't notice that the ballpark where the Cubs play baseball was built in 1914 and it was called Weeghman Field. After the Federal League folded and the Cubs moved from the West Side Grounds, the place was called Cubs Field. Until 1920.

The average reader wouldn't notice that her subtle reference to Buckingham Fountain was a pure flight of fantasy, as the fountain wasn't built until 1927.

Such glaring errors pull my focus completely out of the novel and then dance around my head while I try to read the rest. It's more than merely a distraction.

As a reader, we suspend disbelief so that we can accept the author's premise. Events and characters merge in ways that aren't entirely possible but for the most remote circumstance, but we'll accept it if the author keeps the whole fantasy intact.

Make glaring errors in period detail and I might as well be reading science fiction or steampunk, neither of which I like.

I'm trying to finish the novel, but my heart's not in it. I went into the reading with a notion that the events depicted were based on a woman's real life, with names changed or characters merged for the sake of good literary flow. Turns out it's not all that. Turns out that the distraction of mistakes has me thinking that the book's getting boring and I don't really care how the story ends.

Wrigley Field before the First World War. Everyone knows that's not true. How can you suspend disbelief of a fact that's part of your personal history?
Posted by Peg Leg O'Sullivan at 12:46 PM