A Taste Of Chicago Violence 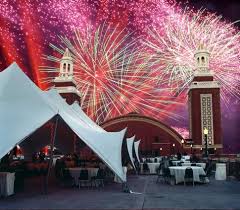 After decades of taking care of his cronies, Chicago's mayor Richard Daley has been forced to cut back on the city's lavish spending. With that in mind, the spectacular Fourth of July fireworks has to suffer the consequences.

Rather than the big production on the third of July at Grant Park, readily accessible to those attending the Taste of Chicago festival, there's to be a clutch of smaller, cheaper displays at three different locations.

It may be more than finances that are driving the revised celebration.

Huge crowds gather at Grant Park in a nightmare scenario for the under-manned police force. Gang violence is worse than ever, and it tends to spill out where special events draw rivals into close proximity.

Not what you want anyone to think of when they think of the city's tourist attractions. It's very bad publicity, coming on top of a string of news stories about multiple shootings that make Chicago sound more like the Wild West than a civilized city.

How's that hand gun ban working out for you, Chicago? Not at all, judging by the numbers.

Out of town guests want to feel safe and secure when they wander around, and they aren't getting reassured when they read about gang fights and running gun battles. Who'd want to find themselves in a crowd, when you never know who might have a gun and decide to use it? Little good is a ban on hand guns when the only ones with hand guns are those who routinely break the law.

With that in mind, those on Chicago's South Side can get themselves over to Rainbow Beach (i.e. the African-American folks) to observe the fireworks display that will be coordinated with another at Navy Pier (white tourists) and a third to the north at Montrose Beach (miscellaneous including Asian and Hispanic).

Divide and conquer. Keep the crowds down to a manageable size at separate locations and pray that the gun slingers confine themselves to their neighborhoods and don't threaten the tourists with their precious dollars.
Posted by Peg Leg O'Sullivan at 12:50 PM