Still Crazy After All These Years 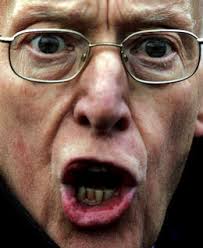 Thought he'd gone away, didn't you?

Assumed he'd quietly retired, to live out his golden years with his subservient wife.

The paper-mill Reverend is still spewing fire, still crazy after all these years.

He's front and center, leading the protests against a visit by a Catholic prelate. What more would you expect from a man who once called the Pope the Anti-Christ, and to his face?

Using the sex abuse scandal as an excuse to excoriate British authorities for inviting His Holiness, Ian Paisley is complaining mightily that Pope Benedict will soon set a red-shoed foot on British soil.

It's the first official visit for the head of the Roman Catholic Church, the same church that the British tried with all their might to wipe out throughout the not-so-united kingdom.

Having met with no little success, Ireland excepted, it must be a mistake to invite the Pope to come and meet the Queen. Such an official meeting indicates British acceptance of Catholicism, and to Ian Paisley, that's heresy.

He's taking some comfort in knowing that Her Majesty will be on Scottish soil, not in England, when the meeting takes place. And he's insisting that there's not a single minister in all the land who wants "anything to do" with His Holiness.

It must really irk Mr. Paisley to know that he's singing in the chorus with gay activists and atheists, who all plan to protest when Pope Benedict arrives in England's green and pleasant land. He hates them, too.
Posted by O hAnnrachainn at 1:23 PM