U2 Can Be Richer 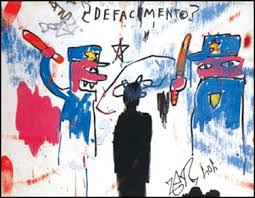 Sometimes you have to be there at the right time. Take Adam Clayton of U2, for example. Not too long after the noted graffiti artist Basquiat shot up for his last high, the bass player spotted one of the young man's pictures in a New York gallery.

The entire band bought it, and the painting was hung in the recording studio in Dublin's Docklands.

Anyone can get tired of looking at the same thing for twenty years. U2 has decided that the Basquiat can go now. They've seen quite enough of it, and it probably won't work in the new studio that An Bord Pleanala doesn't seem to think should be built as designed.

If you're in London on 1 July, and you can convince the doorman at Sotheby's that you're a serious bidder, the Basquiat painting that so entranced U2 could soon be hanging in your living room.

Worried about the size, and whether it will fit? The catalogue lists the canvas as 6 feet square, done up in acrylic, oil stick and bits of collage for good measure.

No one's talking about exactly why they're selling now, but considering the fact that the opening bid is expected to come in at around five million euros, well, it goes without saying. You can make money by investing in art, but you have to buy the right art at the right time.
Posted by O hAnnrachainn at 12:20 PM