Why Stop At False Eyelashes

From now on, dancers under the age of ten will not be allowed to wear make-up during Irish set dancing competitions. To which we can all breathe a sigh of relief. A child does not need cosmetics to improve appearance. The heavy make-up does little more than make little girls look like some sort of miniature adult, and the false eyelashes are too much glamour for the wee little ones. 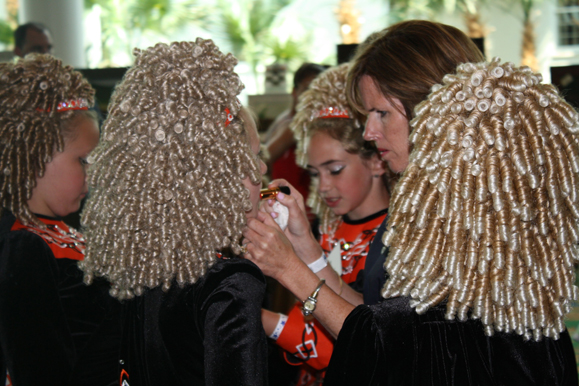 For some reason, fresh faces were deemed lacking in a certain something that some dancing coach must have thought was needed to push the dancer over the top. How to make a girl stand out in a field that calls on regimentation? Cover her features with paint and slap on some abnormally long lashes and the judges will be captivated.

Except that many people are made uncomfortable by children in the guise of sexy adults, especially in a nation still reeling from child sex abuse scandals. To make a girl look like a hoor touches too close to that particular nerve, and even if the original idea was well intentioned, it has now been banned.

But why stop at the eyelashes?

Grand, Coimisiun le Rinnci Gaelach, that you've taken this first step. But can you please do something about the false hair?

Where in God's name did these springs come from and who thought it was an Irish look? I've known girls with curly locks, but not one of them looked like she'd plopped Medusa on the back of her head.

And it's become part of the costume, as much as the proper shoe and the fancy dress.

No one has hair like the this. No one. Yet every girl out there dancing has to don this hairpiece, and then there's the headband to hide the seam so we can all pretend it's her real hair. For feck's sake, why not just put them in hats and be done with it? Something in a lovely Irish tweed that sheds the rain would look far better than the bizarre confection that's de rigeur these days.