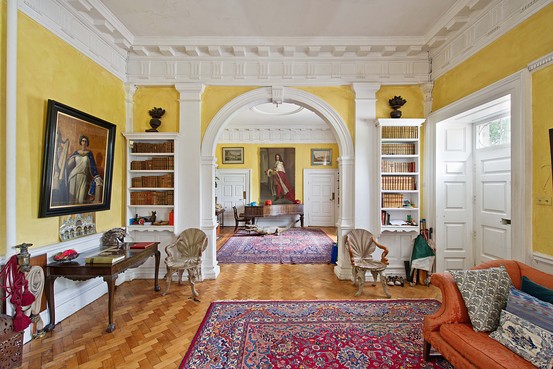 Imagine how much improved your writing would be if you had your pens and reams of paper positioned in the room above. Can you see your laptop propped open on the desk, your notes scattered nearby?

The imagination would flow freely as you placed your characters in an historic setting. Perhaps they would be contemplating rebellion in the American colonies, or the revolution brewing in France. They might be servants from below stairs, secretly sharing their admiration for bold Robert Emmett.

How about a novel set in the era of the Great Famine, in which one of the Protestant Ascendancy is fearing retribution from the starving tenants? Or perhaps you'd examine the conflict between poor Irish Catholics and the wealthy Protestant landlords in 1916, during the Easter Rising and then after, when ethnic cleansing saw the removal of the British aristocracy from Irish soil. And what if one of your wealthy landlords was a Guinness? One of THE Guinnesses who brewed a stout that became iconic, that continued to sell in the poorest places during the hardest of times.

If you have upwards of three million euro on hand, you could be doing just that.

Patrick Guinness, a seventh generation Guinness, bought Furness House, the old family pile, some years back, planning to restore it to its former glory. It had fallen on hard times over the years, and there were many years. The original home was built in the 1730s. As you can imagine, there is a lot of upkeep needed in such an ancient building and the place had been let go as the owners found the cost of repair to be prohibitive.

Even Mr. Guinness gave up on the rehab project, and he has decided to try selling the partially renovated abode once again. Opening bids will begin at three million and go from there.

At that price, it's a relative bargain. You won't find this sort of detailed plasterwork in any modern McMansion, nor will you find a stairway built of Spanish chestnut in a place designed by some starchitect. The grooves worn into the steps cannot be reproduced but must be scuffed in by centuries of feet climbing the stairs, Guinness feet that walked through Ireland's history.

There are other unique features on the grounds as well, including the ruins of a Norman church. What adventures your characters could have in such a setting. How well you could write about them if you were there.

If you have the cash, ring up Richard Doyle at DNG Naas and put in your bid. Then line up your pens or charge your laptop, and get ready to write like you've never written before.

Posted by O hAnnrachainn at 1:12 PM