Romeo And Juliet Were Only Kids

At some point when you're studying Shakespeare's Romeo and Juliet, someone will inform you that Juliet was all of fourteen. They were a couple of kids, back in the day when marriages were arranged early because people tended not to live long. If a family was to keep itself going, the parents had to move on the engagement.

With modern life spans extending easily into the eighty-year range, we see fourteen-year-olds as children. They are far from mature, and certainly not grown up enough to deal with serious relationships.

A little dumb, as well, at that age. With a tendency to act on impulse, without thinking. 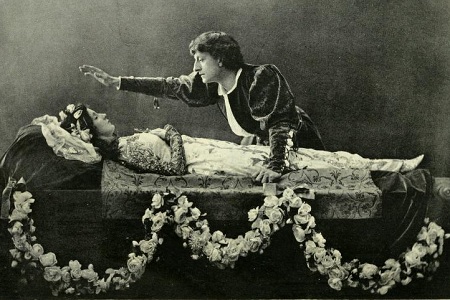 And so we have the story of a real-life Romeo and Juliet, a pair of fourteen-year-old kids who were in love, or so they thought, and they were stuck with parents who were trying to keep them apart.

If Shakespeare's Romeo had a car, there's no telling where the story might have gone. The tale of Braxton Wood and Jayden Thomas played out as that original might have, but for the lack of easy transportation.

And yes, you do have to be sixteen to drive but when a kid is breaking the law, well, what's one more violation?

Mr. Wood took his parent's car and spirited his beloved Jayden away, from their home in Michigan to the nearest big city. Which would be Chicago. Once they had gotten away from those who sought to separate them, they discovered that they needed more of a plan than just getting away. Money would have been useful. Very useful.

Once the pair reached Chicago, they had no money and no place to go. They lived in the car, which provided shelter, but lacked amenities like indoor plumbing and bathing facilities. If they knew the city better, they might have been able to drive to a location near a beach house with showers, but alas there's that financial issue again. And there was always the risk that some policeman would see Braxton driving and wonder if the kid was old enough to drive and pull him over and there goes the whole escape plan.

A local man spotted the kids in the car after seeing a story about them on the local news, and recognized their faces. He called authorities, and you can bet that the star-crossed lovers were glad to be found. No one can live on love alone. The occasional Happy Meal goes a long way to keeping the flame alive.

They are back home in Michigan again, to face the parents who wanted to cool the romance.

Will their adventure bring them closer together? Or will they now drift apart?

There's your writing prompt for the week. You could make an interesting bit of YA fiction about a couple of kids who think they're madly in love forever and forever. You, as an adult, have a pretty good idea of how these things usually end up. Or how you would like other kids to think they'll turn out. Parents always appreciate a little outside help when they're dealing with teens whose brains aren't developed enough to understand all the consequences of a given action. Like running away without knowing where to go or how to support yourself.
Posted by Peg Leg O'Sullivan at 12:59 PM