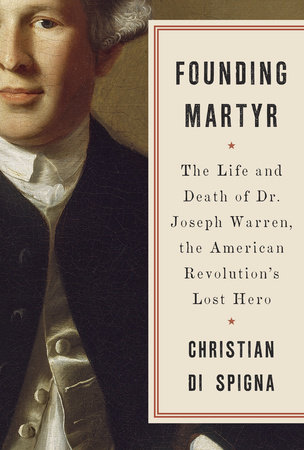 History is written by the winners, it is said, but it's the winners who survive that live to tell their tale.

FOUNDING MARTYR is the biography of one who died early in a conflict, a work that brings to light the many contributions of Dr. Joseph Warren. By rights, he was one of America's founding fathers, and Christian Di Spigna does a fine job of illuminating the life and times of a man who has been largely forgotten.

Dr. Warren had a comfortable life and a booming medical practice, yet he did not hesitate to join the resistance to British interference in colonial self-government. To read about a man's dedication to what he thought was right and just makes for fascinating reading. Imagine yourself, with young children to provide for, but you are so incensed about unfair taxation that you organize resistance, even at risk of imprisonment or death.

The man was an intriguing character, and the narrative lays out a timeline of events that show how one thing led to another until the first shots of the American Revolutionary War were fired. Readers will come away with a strong sense of what made a gentleman in those trying times, and what was expected of those who dared to step forward and lead.

Well worth reading for history buffs or anyone enjoying the liberty bought at a high price.

As always, thanks to Penguin Random House for the review copy.
Posted by O hAnnrachainn at 7:53 PM