Enchantress Of Numbers: A Book Review 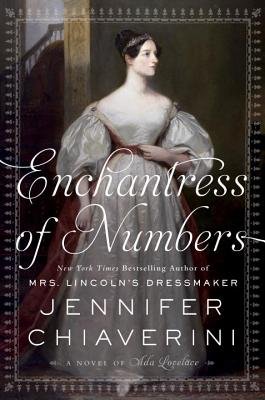 History has forgotten so many women, and author Jennifer Chiaverini brings them back to life. In her newest work of historical fiction she presents the life of Ada Byron King, daughter of the poet Byron, a woman now considered the mother of computer coding.

ENCHANTRESS OF NUMBERS is well researched, and the nuggets of information that pop up in the narrative are never intrusive. Ms. Chiaverini paints a subtle picture of life at the end of the Georgian Era when Ada, daughter of a peer, was being raised by a mother who wished to create a rational, non-imaginative child.

Readers might be a bit skeptical about the early chapters, where Ada relates her infancy as if she was recalling incidents, but read on and the clunky opening fades away as the heart of the story is revealed. Through a difficult and most un-ordinary childhood, a woman with a penchant for complex mathematics arises, and much of the middle section revolves around her efforts to pursue advanced studies while the world expects her to take her rightful place as wife and mother.

A woman's mind was considered a delicate vessel in those days, and too much study was thought to be physically debilitating. It is just one of many issues that Ada had to beat back with guile and clever turns of phrases to reach her goals.

Ada struggles, she perseveres, and in the end she trimphs, although you might have a feeling that her marriage was not so happy as the author depicts it. This is fiction, however, and Ada faces more than enough difficulties to drive the narrative to a positive conclusion. The opening chapters that cover her mother's miserable union with Lord Byron are more than enough dysfunction for one book.

You will most likely have an urge to study Byron's poetry after reading ENCHANTRESS OF NUMBERS, to see Ada through her father's eyes and gain a little insight into his view of his failed marriage and the mother of his only legitimate child. The novel focuses largely on Ada's mother's images, and her determination to keep Ada from every becoming like her father.

Fans of historical fiction will enjoy this one.
Posted by O hAnnrachainn at 8:56 PM