The Confusion Of Languages: A Book Review 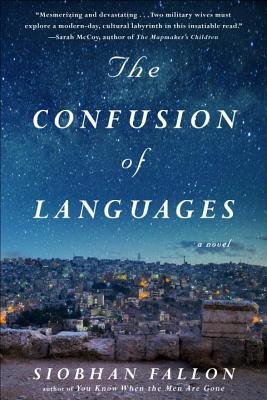 The road to hell is paved with good intentions.

That's the tag line that best fits this particular narrative.

Cassie Hugo is as structured as could be, a control freak whose military husband is deployed to Jordan. So aware of the dangers of radical Islam, she sees a Bin Laden in every Arabic face and threats around every corner.

She's annoying and unlikeable and if author Siobhan Fallon says it once she says it more than enough times. Cassie, being infertile, has an attitude about babies. I got it early on. No need to repeat.

Due to circumstances where you can't pick your friends because there's but a small pool of American embassy workers on hand, she tries to cozy up to Margaret Hugo.

Margaret is a stereotypical California girl, head full of clouds. You can get away with using stereotypes when you've won a few writing awards. But all those awards don't make for a likeable character either.

Cassie keeps her distance while Margaret rushes head-long into making nice with the natives. Being empty-headed, she's blissfully unaware of cultural differences and acts the role of ugly American, doing things her way in the assumption that she can bring people together through kindness. Kindness American style, which does not translate into Jordanian life. Hence, the confusion of languages.

The novel is told in first person by both Cassie and Margaret, so be on your toes as you read. Margaret's side of the story is revealed through her secret diary that Cassie discovers after Margaret goes missing, leaving her toddler in Cassie's care. Oddly enough, Margaret's journal is written just like a novel, with dialogue and everything.

As for Cassie, her narrative covers the time period from when Margaret dumps said toddler and she finds out what happened to Margaret, the chapters moving slowly through time as backstory is revealed and Cassie discovers some insight into herself. To use the military term, Margaret's good intentions result in a massive clusterfuck of trouble that descends on those she tried to help. The actions she takes drive the narrative and work to build the tension, so that you can almost forget how much you dislike all the characters and read on to see how the dust settles.

The story builds to a strong finish, with plenty of strong emotional elements. Some will love THE CONFUSION OF LANGUAGES and some will not get far once Cassie starts whinging about sloppy babies. Self-edit, skim, and get yourself to the meat of the story.

Review copy provided by Penguin Random House, thanks a million.

Posted by O hAnnrachainn at 1:23 PM