Before We Were Yours: A Book Review 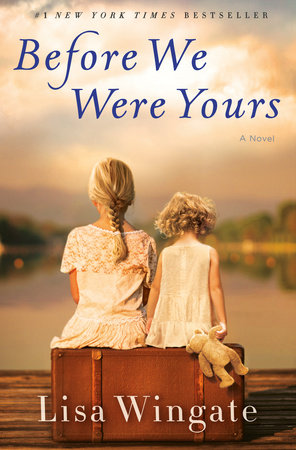 Like THE ORPHAN TRAIN, author Lisa Wingate builds a novel from the bones of history and puts together a very compelling book.

BEFORE WE WERE YOURS presents an adoption scandal that blew up in the 1950's and juxtaposes it with a modern young lady under pressure to marry well, in keeping with her social position. Avery would much rather find out why the strange old lady at the nursing home was so obsessed with a bracelet that Avery was given by her grandmother than make wedding plans with her fiance.

Ms. Wingate creates a mystery for Avery, who sets out to uncover a family secret that might have remained hidden due to her grandmother's senility. Interwoven within this narrative is the tale told by Rill Foss, who is early shown to be the same old woman Avery knows as May.

Readers are given enough insight early on to understand much of the connection between May and Avery's grandmother, and the pleasure in reading the novel comes from following along as Avery discovers those same facts.

There is a great deal of heartstring tugging as Rill struggles to survive the ordeal of being kidnapped by the Tennessee Children's Home baby snatchers. Like the Catholic Church running the mother and baby homes in Ireland, there was a booming market for adoptable children during the 1930's through the 1950's. The same theme runs through BEFORE WE WERE YOURS, as Rill struggles to keep her siblings with her, only to watch them torn away in adoption.

We have some sexual tension, of course, between Avery and the grandson of the man who made it his life's work to find those lost siblings. Additional friction exists between the young lady and her mother, a dispute over proper place and future plans in a powerful, wealthy, politically prominent family. The fact that Avery's father is a Senator lends an added degree of tension because the possibility of scandal is the sort of thing that would put a quick halt to probing. Will there be such scandal, will it bring down the Senator, etc. etc., lends a little interest to Avery's less compelling narrative.

The story is well told and thoroughly enjoyable, right down to the happy ending that isn't overly saccharine.Things don't all work out in the end, like in real life.

Thanks to Penguin Random House for the review copy used here.
Posted by O hAnnrachainn at 3:41 PM