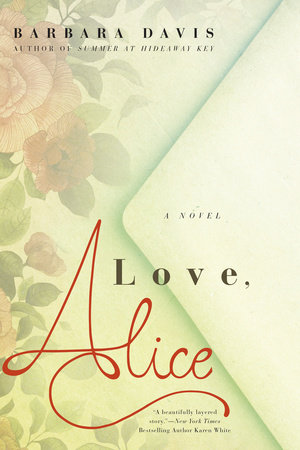 What if Philomena Lee had died, instead of her son Michael Hess? And in this telling, he's straight instead of gay (but not to worry, we'll be sure to be diverse and include a secondary gay character in our tale), and the woman he's drawn to does the hunting down of his mother?

That, in essence, is the premise for LOVE, ALICE by Barbara Davis.

Lacking the power of Katie Hanrahan's THE LEAVEN OF THE PHARISEES, the book touches on the horror of the Magdalene laundries and the lives that were destroyed by religious tyranny. In this case, the novel looks at Alice Tandy, up the stick and the father of her unborn child dead at sea. Her story is told through a series of letters that she pens to the child she was forced to give up for adoption, the letters discovered by a woman who is grieving the suicide of her fiance.

Unlike Philomena, this unwed mother has died by the time the story opens. Her mother turns up looking for her, not knowing the girl's been dead for nearly thirty years, and bumps into Dovie Larkin who then sets off on a quest to solve the mystery. What became of Alice's child, who she was seeking when she emigrated to South Carolina? Can solving this mystery bring closure to Alice's mother and Dovie as well?

The fact that Dovie's gay-dar is non-existent can be an impediment to a reader, who may very well be screaming out the answer to one question long before the author lets Dovie figure things out. Get on with it, for feck's sake, you may be saying, but don't give up. Except for that middle section that drags, the rest of the novel moves along at a comfortable pace.

The narrative gets a bit chunky when the author needs to present more than can reasonably be shown through an epistle. Is there anything more awkward than a letter that breaks out into dialogue? As if anyone would actually write a letter in that way? That can be the problem when one type of novel structure is used, and then doesn't quite fit. Somewhat distracting, after the majority of the backstory was presented in a standard form that felt real. It can stretch the suspension of disbelief to make a sharp turn near the end of the novel, but once committed to using missives, Ms. Davis had to keep going.

The misery of the Magdalene laundries gets a passing reference because this is a work of women's fiction that features a strong romantic element and plenty of emotion. You'll probably guess which character is actually Alice's child, a fairly predictable outcome as it is the sort of conclusion one expects from light fiction like this.

If you want real insight into the damage done by the Sisters of Mercy in their slave labor camps, read Katie Hanrahan's novel. If you just want something with a feel good ending, LOVE, ALICE will do.
Posted by O hAnnrachainn at 7:53 PM