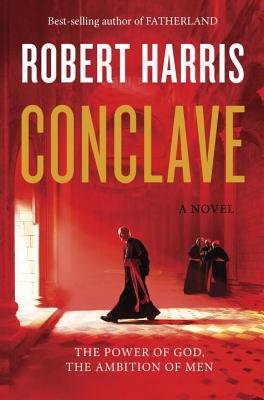 So much mystery surrounds the selection of a Pope. The intrigue, the human failings cloaked in piety, the potential for the sorts of shenanigans you'd find in any political contest. It's all there in CONCLAVE.

Author Robert Harris presents the Papal Conclave through the eyes of the Dean of the College of Cardinals, a holy man who prays often and with sincerity. He really believes, does Cardinal Lomeli.

Using current events intertwined with imagination, the story unfolds behind the closed doors of the Vatican, with the elector cardinals cut off from outside communication. Things start off smoothly, with the initial vote and the voting trends and the like as leaders emerge, but rumours reach the Cardinal's ear and he has to check things out. One can't have a Pope enmeshed in scandal, not these days. Cardinal Lomeli is determined to protect the Church at all costs.

One enquiry leads to more questions, and more political maneuvering, as the leading candidates campaign in their subtle way. Under pressure to pick a Pope before the laity starts thinking there's some serious problems with the Church hierarchy (the pre-Vatican II sorts duking it out with the liberal wing, if you will), Cardinal Lomeli faces a crisis of faith. How to out a corrupt cardinal, if indeed the man is corrupt, or is it best to deal with the corruption later and appease the public?

The tension is subtle, but it is there as you turn the pages to see what comes next and how the Cardinal will unmask the wolves in sheep's clothing who would be the shepherd. The novel is great fun to read, even with the frequent interspersions of Bible verse that has me wondering if I've forgotten the words, I've lost track of the revisions that came through a few years ago, or Mr. Harris is relying on his heretical Church of England Bible for the quotes.

I would recommend this to my Catholic friends, of course, but anyone who enjoys political thrillers would find CONCLAVE a fascinating read.

Thanks to Penguin Random House for the review copy.
Posted by O hAnnrachainn at 4:02 PM