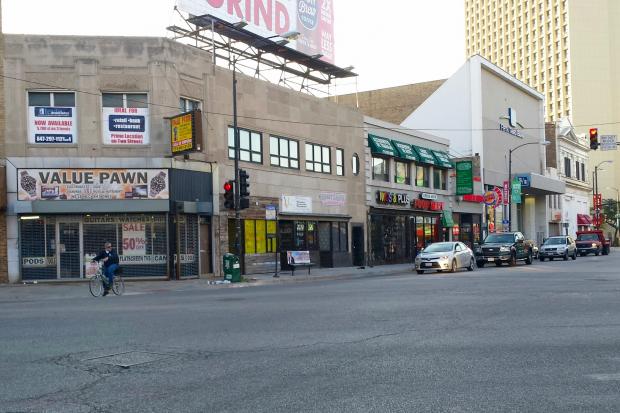 The sort of people who can afford to live in Bucktown and Wicker Park are not the sort of people who need a pawn shop. They use banks. They have jobs that pay well, and if they find themselves running a little short of cash, they either hit the ATM or whip out a credit card.

When the locals in a given neighborhood have no need of a shop in the neighborhood, that shop goes out of business. No clients, no income, no way to survive.

The businesses do not shutter their doors all at once. The change is gradual, like the fog creeping in on little cat feet. One day, there is merchandise in a storefront, and the next day, the windows are papered over and a "For Rent" sign appears. It's almost not noticeable, that single gap on the commercial block. Some new business comes in, but it isn't a taqueria or a dollar store. It's a boutique, or it's a restaurant serving high end grilled cheese sandwiches and craft beers.

Some would say it's progress that's marching on, progress that sees a business catering to the working classes or urban poor giving way to shops that are patronized by the young urban professionals.

For the few clinging to their homes near Noble Square, they may not see it as progress when their nearest pawn shop is gone soon.

Value Pawn has been doing business at the corner of Ashland and Milwaukee Avenues for the past five years, and it's a wonder the owner opened up in the first place. Back in 2011, the area was already undergoing gentrification. Scott Lee Cohen, who once toyed with the notion of public office, bought the structure at a good price, getting in at the right time, to wait out the gentrification wave. Now it has washed over the Noble Square area, having swept across Bucktown and Wicker Park, and the investment is set to pay off. The pawnbroking business, however, did not face the same benefits.

Realtors will tout the location, location, location, but you won't find any literature promoting the site as perfect for a pawnshop. No, in this case of gentrification, the seller is suggesting the corner building as a good spot for a restaurant. Lots of foot traffic, they'll say, with all the young urban professionals marching by on their way to the public transportation facilities that bring them to their jobs in the Loop. They're fond of drinking coffee and nibbling on whole grain, gluten-free, low fat muffins. Why not start up your business at Ashland and Milwaukee and cater to those unmet needs?

They like to dine out, as evidenced by the numerous trendy restaurants that dot the area, and that's more than can be said about the former residents of Noble Square. Some of them are still around, grumbling about the way the place is changing and you can't recognize it for all the fancy places popping up, but that's a good sign. It shows that you're getting in early, like an urban pioneer, to make your mark or stake your claim to the hipster dollar.

It's gentrification in action, creeping in quietly, to push out the old and the poor and drag in the well-heeled with plenty of money to spend on luxuries. They don't need a pawn shop. So the pawn shop will go to where it is wanted, until that neighborhood becomes the latest hot spot for gentrification that will creep in and spread across the city.

It's inevitable. The only people who can afford the ever-escalating taxes and fees imposed by Chicago's government are the ones with money. The ones who have never set foot in a pawn shop.
Posted by Peg Leg O'Sullivan at 1:44 PM