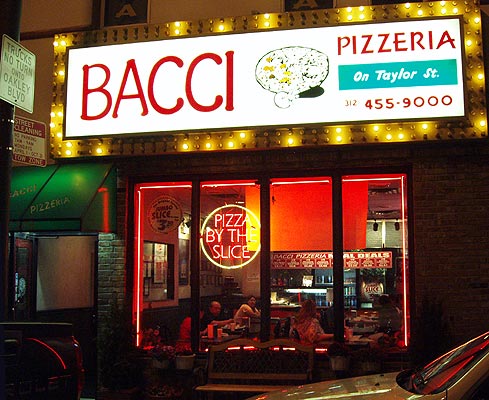 How very sad, when the pizzeria caught fire on Christmas Eve and the family living in the apartment upstairs were burned out. On Christmas Eve, of all the times, and it was lucky that a young man happened by to help them escape.
As it turned out, the brave man was sent by his superiors who had started the fire. The street gang had only been paid to torch the building, not kill innocent tenants.
Robert Didiana owns all of the Bacci pizzerias in Chicago, but the one on Western Avenue was in need of repairs. Old buildings require upkeep, and the cost was more than the owner wanted to spend. Add up the profit, divide by the number of pizzas required to generate enough cash, and his solution was arson.
The boys from A.T.F. finally cracked the case when they wired a gangster who was facing some serious weapons charges.
Mr. Didiana was friendly with the gangster, keeping him informed of police activity in the neighborhood. Such information isn't free, of course, and the gangster owed a favor. He generously offered to burn down the place, for a small fee, and Mr. Didiana would then collect on his $250,000 insurance policy.
Currently out on bail, Mr. Didiana is expected in court on Friday to face charges.
Any chance that he might be running a special at Bacci across from Wrigley Field? The Cubs are red hot these days, and a play-off run would bring in plenty of business. Nothing like an extra crispy crust under all that sauce and cheese to generate the price of a good lawyer.
Posted by Peg Leg O'Sullivan at 11:28 AM