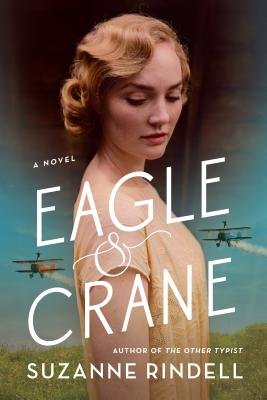 I want to finish this, if only to discover what exactly is the mystery in this piece of historical fiction, but I can't seem to get through the pages.

EAGLE AND CRANE is built on the bigotry faced by the Japanese in the American West during the Second World War, using the old contrivance of friendship made and broken and strained between ethnic groups. The problem I've encountered is one of repetition. How many times must I be told by the author that Japanese-American Harry is wild about Harry (Houdini) and Louis comes from a long line of hardscrabble farmers?

I got the first few times, honestly. Quite clear.

The narrative winds through the Great Depression era of aviation barnstormers while intertwining a World War II tale of Japanese incarceration and the fate of Harry, possibly murdered by his fellow barnstormer Louis. There's the love interest to complete the triangle, but I've gotten too bogged down in extraneous backstory. Does a reader really need to know how Harry's family came to arrive in America? Or how Louis' kin chose the US of A? The enmity between the families could have been explained in far less than two-three chapters.

I'm bored. Time to read something else and maybe finish this some other time.

Thanks to Penguin Random House for the use of the review copy.
Posted by O hAnnrachainn at 4:55 PM