The Mirage Factory: A Book Review 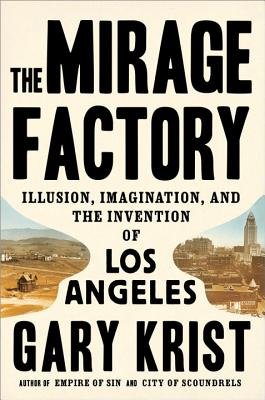 Los Angeles is an interesting bit of sprawl, and to read THE MIRAGE FACTORY is to come to an understanding on how that urban oasis came to be, in a most unlikely of spots.

Gary Krist does a fine job of presenting three separate narratives that describe well the events that shaped LA and guided the city towards significance. He begins with the story of Mr. Mulholland, the man who stole water from other areas so that LA could grow. Intertwined with the water saga is the brief history of D.W. Griffith, the star film director who was prominent in the film business that would define the area. Finally, the author introduces the reader to Aimee Semple McPherson, a character in her own right, and the sort of resident you'd expect to find in a city that has its own culture.

While the three key players were familiar to me, there was a great deal that was not, and I found this book to be a page-turner as Mulholland pushed ahead with his scheme to irrigate LA while D.W. Griffith cranked out film after film and became a force in the movie business. And how did the evangelist get her start before drifting into scandal? It's in THE MIRAGE FACTORY.

I thoroughly enjoyed this treatment of LA in the early decades of the Twentieth Century, when the city grew so fast that the water supply system couldn't keep up. The book is packed with fascinating details and anecdotes, and would be better than any guide book if you're planning a trip out west. Or have ever enjoyed a film or wondered about those mega-churches that draw enormous crowds.

Thanks to Penguin Random House for the advanced copy. This was one of the best I've seen.

Posted by O hAnnrachainn at 2:19 PM