You Were Here: A Book Review 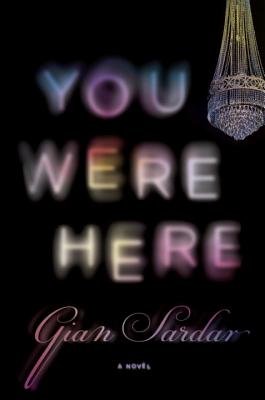 Never start a novel with a dream, budding authors are told, but a dream opens YOU WERE HERE. But it's not just a dream, for the dream here is as much a character in the story as the protagonist Abby Walters.

Those budding authors are also told to kill their darlings, and that's a bit of advice that Gian Sardar should have taken, but I digress.

The novel starts out slow, slow, slow, and I was close to abandoning the thing as I waited for something to happen. Abby is wretchedly annoying, obsessed with death and dying to the point that you wish the manuscript had been edited a bit more tightly to cut out some of the constant repetition. We the readers get it, she's afraid of things to the point of nearly being crippled, always thinking she's about to get killed in some accident.

Don't give up on this one. In time, Abby will leave Los Angeles and her committment-phobic lover to attend her high school reunion, where she reconnects with the boy she once adored from afar. Turns out he's a police detective on the trail of a violent serial rapist. And while Abby is back in her former stomping grounds, she goes snooping around to uncover the meaning of a cryptic note she finds tucked into a ring box that once belonged to her grandmother.

Woven into Abby's narrative is the tale of a woman connected to the grandmother, a woman who is having an affair with a married man. That subplot is interesting in itself, and the tension that builds as the man plans to leave his wife, who has uncovered the illicit romance, will have a reader turning the pages to see what comes next.

That serial rapist is still on the loose in the present day, so there's tension building in that section of the narrative as well, enough to keep your eyes glued to the book.

After a slow start through a tangled thicket of pretty prose that feels quite unnecessary the story gets down to business, and YOU WERE HERE proves to be an intriguing read. Just skip over all the darlings that the editor was unable to kill and you'll find a well-crafted novel for a weekend's entertainment.

As usual, it's all thanks to Penguin Random House.
Posted by O hAnnrachainn at 1:01 PM