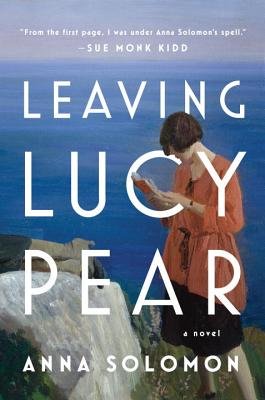 A young Jewish women gives birth out of wedlock and chooses to leave her newborn under a pear tree, where she knows the hardscrabble Irish-Catholic pear stealers will find it. That infant is Lucy Pear, the one who gets left.

The novel is an intimate portrayal of human interactions, with narratives intertwined. After leaving the baby, Bea is expected to go back to her former life as if nothing happened, but nine years after abandoning the infant she is back to call on her elderly uncle who took her in when she was up the stick. The woman who found Lucy ends up as the uncle's nurse, brushing the edges of Bea's life, but each knows the secret of Lucy Pear and that secret hovers over the story.

Anna Solomon does a fine job of creating intersections that ramp up the tension as the reader wonders when Lucy Pear will realize that Bea is her birth mother. At the same time, she weaves a backdrop suited to the setting, with Emma looking at moonshining as a way to make a few dollars during Prohibition. There is tragedy that results from unintended consequences, pitting rich against poor at the same time as Sacco and Vanzetti stand trial at the height of the labor movement, plenty of little subplots to keep a reader's interest.

The ending falls off into literary fiction prettiness, filled with scenes of the future that the omniscient narrator assures us our characters don't yet know will happen, and finally the last chapter jumps into the present tense because, well, you know. Literary fiction.

There is no plumbing the depths of these characters. They float on the surface of the novel, somewhat shallow but entertaining in their diversity. In these modern times, you come to expect a stock gay character (Bea's husband) and an evil industrialist oppressing his workers and trying to bust the stonecutter union. Even Lucy is given the cross-dressing treatment, but it feels more like a girl disguising herself as a boy to live a more full life at a time when girls faced far more restrictions on their activities.

All in all, this was a pleasant read, the sort of book you get lost in and don't regret the time spent in the reading.
Posted by O hAnnrachainn at 1:19 PM