City Of Secrets: A Book Review 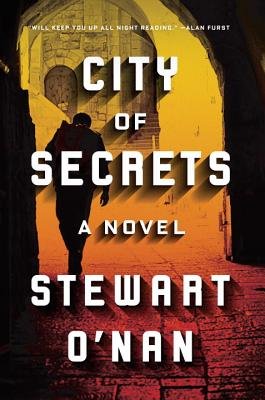 A man with no ties to the world, the protagonist Brand drifts through the world like a dead leaf blown by the wind. He has landed in Jerusalem after the Second World War, a Latvian Jew who survived the concentration camps because he was handy.

We meet him as he goes about his business as a taxi driver with a false identity, and vehicle, provided by the Jewish underground that is fiercely battling against the British government of Palestine. He is a survivor, however, and author Stewart O'Nan does a fine job of showing a survivor's guilt as Brand cannot stop remembering his wife and parents and sibling who all perished. He is haunted by a camp mate whose life he did not save so that he might save his own. A bleak tale? It is indeed, but one that is well written.

The pace of the story is slow, given over largely to internal dialogue as Brand wrestles with the meaning of his survival. Also slow-moving is the development of his relationship with a prostitute (and survivor like himself) as he veers dangerously close to love. She is also his contact in the underground, also broken by the Holocaust, and drifting with a purpose that Brand fails to recognize until too late. Perhaps he is unwilling to fully abandon the memory of his late wife, for to lose memories is to lose his last link with his past. As for Eva, known as The Widow, she keeps herself to herself, but such reticence may have more to do with her dedication to the mission or a sense of fatalism. Why did one person survive a camp while others perished? It is the question that torments those who populate CITY OF SECRETS.

Detached, Brand goes where he is told and follows orders as an operative of the movement that sought to create a Jewish homeland in the Levant. His curiosity in a world of secrecy and paranoia takes him to dangerous places when he wonders too much about the identity of a very attractive woman who often appears with disguised members of the Jewish freedom faction. His timing could not be worse, but again, he is so focused on daily survival that he fails to recognize signals from Eva that are meant to warn him.

The tension builds towards the end as the guerrilla fighters increase their terrorist activities and Brand fears that he is under suspicion as an informer. Without giving away the ending, the conclusion follows all that goes before, and while it may be as bleak as the rest of the novel, you are left with the slightest tinge of hope emanating from a survivor who knows how to survive.

It is a grim bit of prose, and one that is easy to put down and pick up again. The story is depressing, with its unflinching look at the scars that remained after a war ended and entire communities were obliterated. In our modern era of Middle Eastern politics and wavering support for Israel, this is a timely read that would foster a great deal of discussion among the book group members.

As always, thanks to Penguin Random House for the chance to read the novel before it is released.
Posted by O hAnnrachainn at 5:06 PM