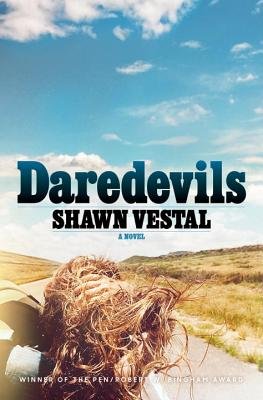 Loretta is a young woman in a polygamist sect who longs for the outside world. How does she know about that world if she's living in a closed society? That's fiction for you. Suspend disbelief and carry on.

Jason is a young man in a standard-issue Mormon farm family who longs for the outside world. And all things Evel Knievel, the daredevil who inspires the boy to push against the forces that seek to hem him in.

You know these two are going to collide at some point because that's how a novel works. The problem is, you first have to get beyond the author's decision to insert fictional memoir-type paragraphs from the aforementioned Evel Knievel. The paragraphs don't do a thing to move the narrative, and in truth act like a brake on an otherwise gripping story.

For some reason, Shawn Vestal also felt compelled to include a couple of chapters told from the point of view of Ruth, the first wife in a polygamist family who does not welcome the arrival of wife number two, Loretta. Again, the prose does nothing to move the narrative and we don't really care all that much about Ruth because she's a minor character.

If you skip the two chapters told by Ruth and ignore anything that is ascribed to Evel Knievel, you stand a better chance of making it through a rather choppy format that shifts POV with rapidity at the end. It's grand, however, because Shawn Vestal teaches creative writing so he knows what he's about. He didn't need an editor, apparently, under the assumption that he must surely know how to put a novel together.

Would he have allowed one of his students to get away with the old trope of a boy growing in wisdom by meeting his idol and discovering that the hero is a mere mortal? Was it not enough for Jason to become disillusioned by events that spiraled away from his dream?

A good editing would have worked wonders on what might have been a brilliant bit of prose. The novel is worth reading for some insight into the mindset of two people striving to be more than society holds for them. Just skip over the parts that should have been cut out and you'll have an enjoyable read.

Thanks to Penguin Random House for the copy provided.
Posted by O hAnnrachainn at 4:54 PM