Who does the baby look like? It's a popular game played when you have to go call on someone who's just had one and there isn't much else to discuss because babies don't actually do much to elicit great dialogue.

Ever since the little blond haired girl was found in the company of a gypsy family in Greece, however, the game has taken on a new level of intensity.

People are looking. Looking closely. At those who are not from around the town. Whose children may or may not resemble the parents to a sufficient degree. 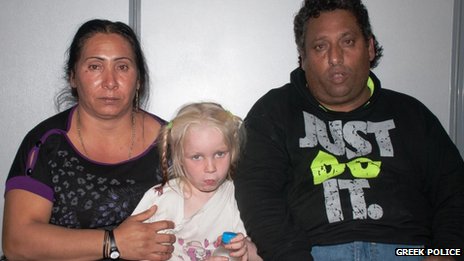 In Greece, the Roma parents displayed the East Indian features that represent the origin of the gypsies, a group of people that migrated west at some long-ago time and then kept on traveling from town to town in search of work. They did not blend in with the native inhabitants, and so they stood out, and so they became infused with folklore. For centuries, children have been told to stay away from the gypsies because they kidnap pretty children. That myth remains, in part because there is a very small subset of Roma who do engage in such crimes, among others. And because myths tend to remain in the culture, in the form of stories told at bedtime.

The Greek incident may be a case of kidnapping or a case of illegal adoption, or just another scam to get more government subsidies handed out for child welfare. The more chldren, the bigger the payout, and the Roma clan in Greece claimed more children born in the space of ten months than was biologically possible. If some bureaucrat had bothered to check into it, the little girl would have been found much sooner, and the trail might not have grown so cold.

The story has appeared all over the world, and the fair-complected residents of Dublin are not strangers to international news stories. They heard, they saw the pictures, and someone went so far as to presume that a similar case was playing out in the city. The gardai were called out on Monday because a child did not seem to look like the parents at all at all.

Until DNA can prove the claim of the parents that it is indeed their daughter, the child is in protective custody. The proofs that they offered, a birth certificate and location of the live birth, did not match up with hospital records.

Another family went through the same ordeal on Tuesday, the same scenario playing out again. The baby boy didn't look like his parents, as far as the neighbors could judge. The gardai were called out. The child was taken into protective custody.

Lucky for them that they had paperwork that proved the child had been born to the mother in an Irish hospital, a fact the hospital was able to confirm. After hours of mental torture, the father was able to reclaim his son and go home.

To find someplace else to live, as soon as possible, and as far from prying eejits as he could run.

Chances are, the gardai will be called out again and again, as people with little else to do than spy on their neighbors play the "Who does the baby look like" game and create turmoil when they have never set eyes on the child's grandparents or great-greandparents and haven't a clue as to family resemblance. That's because the people they spy on are new to the area, strangers, like the gypsies who steal children.
Posted by O hAnnrachainn at 3:53 PM