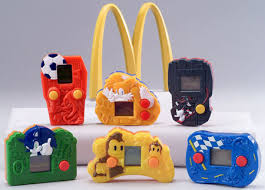 Given the gay culture that imbues San Francisco, it comes as no surprise that the city's ruling citizens would ban an item aimed at children.

They're a childless lot, by and large, so they have limited experience with the offspring of the breeding class. Easy enough to wipe out the Happy Meal when you're not the one looking into the tear-moistened eyes of the dejected ones you love more than life itself.

Parents don't know what's good for their children, but a group of elected officials do. So they've banned the distribution of toys with children's meals. It is illegal for any restaurant in San Francisco to include a little lagniappe with the burger and fries.

Restaurants can avoid prosecution by modifying the food to suit the standards of those same elected officials. That means a limit on calories, sugar, fat and what have you. Again, it's because those who reproduce biologically don't have a clue.

While there are some parents who have the strength to say no to a child who's demanding something the parent doesn't want them to have, there are others who want to be best mates, not stern parents. They won't say no, but if the government gives them a sound reason to refuse, why, it's Daddy and Princess both being made to suffer and won't that make their bond stronger.

On the other hand, the restaurant can charge Daddy one penny for the toy that used to be free, and the Happy Meal is back in business.

Will the anti-toy stance have a positive effect on childhood obesity?

It would if the city fathers ordered that the free toy be placed at the top of a steep San Francisco hill, and the child made to walk up to the top for the prezzie. It isn't so much the food the little ones eat as the lack of exercise they receive in a litigious culture where physical education is frowned upon because someone might get hurt and then sue the school.

Banning the Happy Meal is going about things the wrong way. Better if the wise folk who run San Francisco had mandated that restaurants serving children install treadmills so that the kiddies could be forced to run a mile or two to burn off the calories they consumed.

Put the toy on a stick and dangle it under their wee little noses. It's a concept that works with dumb animals.
Posted by O hAnnrachainn at 12:06 PM